By Leadership Lowndes No Comments 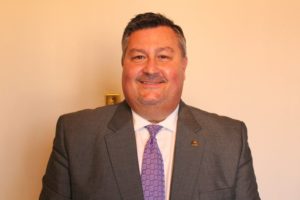 Leadership Lowndes alumnus Mark Barber was appointed city manager by the Valdosta City Council at a meeting Thursday, March 22, 2018.  Barber was appointed interim city manager in November 2017. He was originally scheduled to hold the interim position for six months, but council unanimously voted in favor of him taking the position full-time.  The appointment comes after former City Manager Larry Hanson retired after 22 years of serving in the position.

Barber said he was humbled by the confidence and trust of the mayor and city council. “I pledge that each day the citizens of Valdosta will get my very best,” Barber said.  Barber served as the assistant city manager for the City of Valdosta from 2015 to 2017, where he provided city-wide administrative support to the city manager and was responsible for most of the city’s departments and divisions that reported directly to him.
Mark has a long history with the city, having served for 26 years, beginning in 1989 when he was hired as the city’s principal accountant. He is a member of the Leadership Lowndes Class of 2008.  Congratulations Mark!
Nominate a Community Leader for Leadership Lowndes Learn More